In real estate, location is everything. Is the same true for education? Personal finance website WalletHub conducted an in-depth analysis of school systems across the nation to come with the best and the worst of 2017.

WalletHub analysts compared each state’s (and the District of Columbia’s) school systems across 21 key metrics, including such “quality” metrics as student-teacher ratio, dropout rate, and standardized test scores, as well as “safety” measures like incidence of bullying, disciplinary actions, and drug use.

The quality of public school systems often comes down to local funding and community investment, or, sadly, the lack thereof. These statistics, along with other surveys, confirm that well-funded public school systems consistently outperform poorly funded ones. Still, money doesn’t fix everything. The role of government—local, state, and federal—all come into play, not just in terms of finances but also regarding curriculum and standards.

States with the Best School Systems

Massachusetts was at the top of the list for both quality and safety. 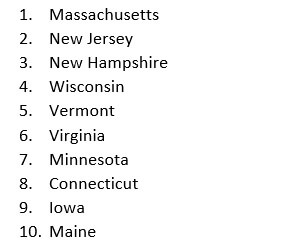 States with the Worst School Systems

New Mexico ranked last for quality, while Louisiana was at the bottom of the safety rank. 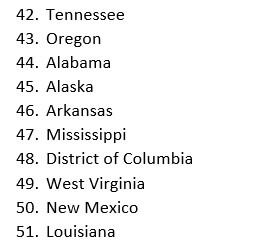 Key metrics of the best and the worst

Vermont, North Dakota, and New Jersey have the lowest pupil-teacher ratio, while California, Utah, and Arizona have the highest. At 10.55, Vermont’s is more than two times lower than California’s at 23.58.

Illinois, Missouri, and Wisconsin share the highest median SAT score, 613.33, which differs significantly from the nation’s lowest scores from the District of Columbia, Delaware, and Idaho. DC’s median score is just 396.67.

Interestingly, the District of Columbia ranks very poorly on the above measures, but it boasts the lowest rate of online bullying incidents across the nation. Florida and North Carolina round out the top three. Idaho, Nebraska, and West Virginia have the highest bullying rates. To compare: The District of Columbia’s share of high school students who were bullied online is 7.86 percent; Idaho’s is 21.08 percent.

As part of its number 1 safety rank, Massachusetts has the lowest share (4.06 percent) of high school students who reported being threatened or injured with a weapon on school property, followed by Wisconsin and North Carolina in the number 2 and 3 spots. Sadly, 10.60 percent of students in Arkansas reported weapons threats or injuries.

Schools are more than their test scores and student-teacher populations, of course. They’re part of a larger community. A “quality” school cannot successfully reach a child who is too frightened of violence or drug deals to make the daily commute. Likewise, a safe, quiet neighborhood does nothing to improve a school with ineffective or unqualified teachers and administrators.

The impact of government

Another major indicator of what happens in public education comes from policies enacted by the federal government, and tension between local and federal control of public education has been a political lightning rod for years. Whether it’s George W. Bush’s No Child Left Behind Act (2002) or Barack Obama’s Every Student Succeeds Act (ESSA; 2015), or current Education Secretary Betsy DeVos’s advocacy for private school vouchers, decisions at the federal level have huge impacts at the state and local levels.

Most American families rely on their public-school system to provide their children’s education. And those schools fight a constant battle to balance their budgets and meet mandated educational outcomes, all impacted by an unsettled political environment.

As with the SAT, there are no easy answers.